From True Crime Wiki
Jump to navigation Jump to search

TC: What is your own sense of morality? How do you differentiate between good and bad? RB: Good and bad? It's all good. If it happens, it's got to be good. Otherwise it wouldn't be happening. It's just the way life flows. Moves together. I move with it. I don't question it. TC: In other words, you don't question the act of murder? You consider it "good" because it "happens." Justifiable. RB: I have my own justice. I live by my own law, you know. I don't respect the laws of this society. Because society doesn't respect its own laws. I make my own laws and live by them. I have my own set of justice.

TC: Tell me, Bobby, how do you view yourself? RB: As a convict. TC: But beyond that. RB: As a man. A white man. And everything a white man stands for.

TC: Why? RB: For the same reason he snuffed Kennedy. Recognition. Half the people who snuff people, that’s what they want: recognition. Get their picture in the paper. TC: That’s not why you killed Gary Hinman. RB: (Silence)

TC: Did you see Manson as a leader? Did you feel influenced by him right away? RB: Hell, no. He had his people, I had mine. If anybody was influenced, it was him. By me. TC: Yes, he was attracted to you. Infatuated. Or so he says. You seem to have had that effect on a lot of people, men and women. RB: Whatever happens, happens. It’s all good.

RB: I said: Who says they were innocent? They burned peo­ple on dope deals. Sharon Tate and that gang. They picked up kids on the Strip and took them home and whipped them. Made movies of it. Ask the cops; they found the movies. Not that they’d tell you the truth.

"I almost went into cardiac arrest. God! The Manson Family looked just like my friends at the time!..."The Manson Family" were the hippies all our parents were scared we'd turn into if we didn't stop taking drugs."

"Sexy, scary, brain-dead, and dangerous, this gang of hippy lunatics gave new meaning to "folie à famille", group madness and insanity as long as the same people are together and united."

Manson and His Girls

I think you need to be careful about those over generalizations because we seem to think of this time period of the entire country being hippies, antiwar protesters and liberals. But that it is obviously not true because there was the silent majority that seems to get overlooked, but with Nixon winning the White House by a landslide, is it fare to say that at least part of the youth didnt subscribe to this hippieism because the obviously had to vote for Nixon?

Is it fare to say that a fatherly figure can exert complete control over his daughters? and if they really believed that sex is love and they were having it with their "father" than can that sort of love get someone to do anything for you?

The Family and the Girls 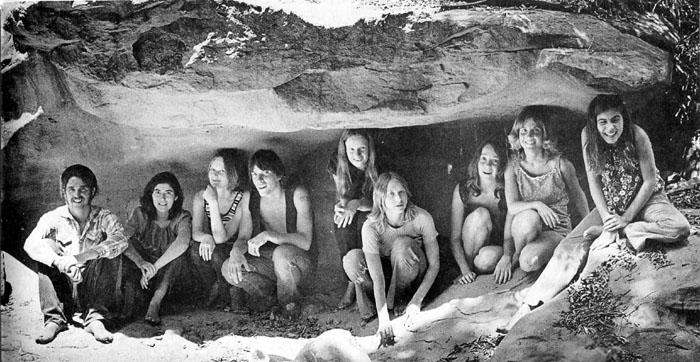 On p.345 of "Charles Manson and his Girls" the author notes that the "girls are of such a nature that they are particularly responsive" to Manson's requests

p.346 - "Charlie was always talking about love, and we were all caught. The girls particularly."

p.346 - "The consequences of being totally, blindly in love, then, could be interpreted as insisting upon an abdication of will. As one of the Manson girls said about an earlier episode in her life: 'I was just insanely in love with Al, would do anything for him...anything.'"

Any thoughts on the spirituality of the situation? Could it be considered their "religion?"

The LSD/Marijuana subject on p.347 was brought up last class

The Application of Sociological Theories